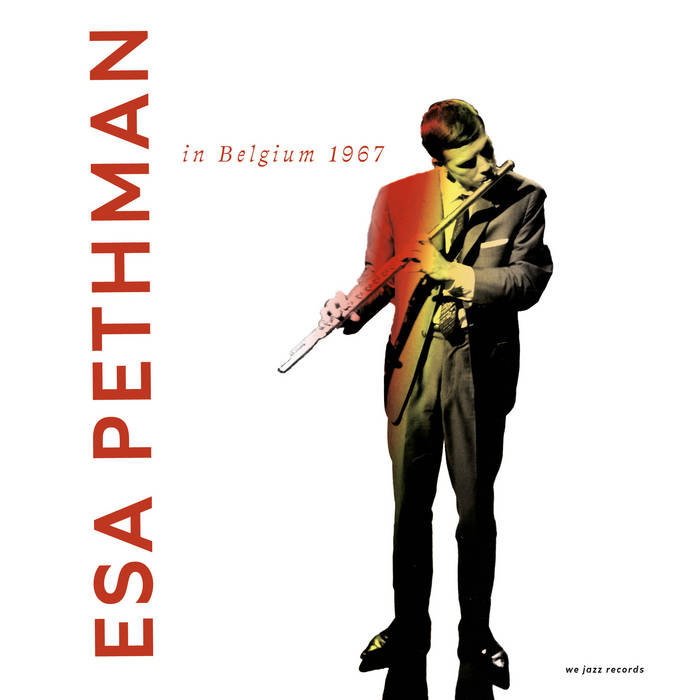 We Jazz Records kicks off their new series of archival 7" releases with Esa Pethman "In Belgium 1967" released 23 September 2022. The two-tracker is licensed from the Belgian VRT radio archives and both of the pieces are previously unreleased. Finnish jazz legend Pethman, heard here on alto flute and tenor sax, joins forces with European jazz greats such as Heinz Bigler, Uffe Karskov and Jean Fanis. This is a small but valuable piece of unheard European jazz history from the early heyday of modern jazz. The physical release is a quality "inside-out"-styled EP with 3mm spine and small center hole on the 45rpm vinyl.

An excerpt from the liner notes by Mikko Mattlar:

"Esa Pethman (b. 1938) was one of the key figures of modern Finnish jazz in the 1960s. His album The Modern Sound Of Finland was the first Finnish modern jazz album and his composition "The Flame" a true modern Fenno-jazz evergreen.

Pethman was born in Kuusankoski, 135 kilometres from Helsinki in the Kymenlaakso area. The jazz scene was active even though it was an area of rural landscapes and paper mills. Pethman discovered jazz when he heard a Charlie Parker record being played at a local music shop in the late 1940s. Following Parker, bebop became his favourite style of jazz.

Young Pethman played flute and saxophone in local bands who accompanied schlager singers. They played tangos and waltzes for dancers, but usually started a typical dance event with an hour of jazz. In 1959 Pethman moved to Helsinki to study music at the Sibelius Academy. Back then it was a strictly classical music academy, but Pethman later described the studies as crucial for his development and career. He quickly made his way to studio sessions and into the best orchestras in Helsinki.

As a student of composition, Pethman also began writing his own music. "The Flame" was a melody he just got on his mind one night, and he decided to write it down. The catchy composition was released as a 7" single in 1964, a year before Pethman's debut album. Both records stand as benchmarks for modern Finnish jazz. The album consisted entirely of Pethman's compositions, not versions of jazz standards like a lot of the Finnish jazz released until then.

In the mid 1960s, Finnish jazz was also taking its first international steps. Pethman's quintet took part in the first Montreux Jazz Festival in Switzerland in June 1967. At the Montreux jazz band competition, the quintet came in fourth of the twelve contestants. Despite not winning the competition, the band got an honourable mention, and Pethman was now recognized outside Finland.

In December 1967 Pethman travelled to Brussels. His visit was organised by the national Finnish broadcasting company Yleisradio and their jazz program producer Matti Konttinen. Konttinen was supposed to go to Brussels with Pethman, but the musician ended up traveling alone.

In the Decca recording studios Pethman played two songs. He recorded a version of his most famous composition "The Flame", where he played the alto flute and was accompanied by Belgian musicians. On Swiss saxophonist Heinz Bigler's composition "Like Steel", Pethman played the tenor saxophone. The band was now more international, consisting of Bigler, the Italian Francesco Santucci, the Dane Uffe Karskov, a Belgian rhythm section and Pethman. After 55 years, Pethman still remembers Bigler's remarkable skills as a saxophonist.

The two-day visit included the recording session, a dinner and a concert. Pethman and the other non-Belgian musicians came to Brussels mainly to play at a jazz concert organised by the European Broadcasting Union EBU. They played at the studio first, and the concert was held the following day. Pethman and all the other soloists played as members of an international big band. The studio and live session were produced by the Belgian Radio and Television jazz section leader Elias Gistelinck."