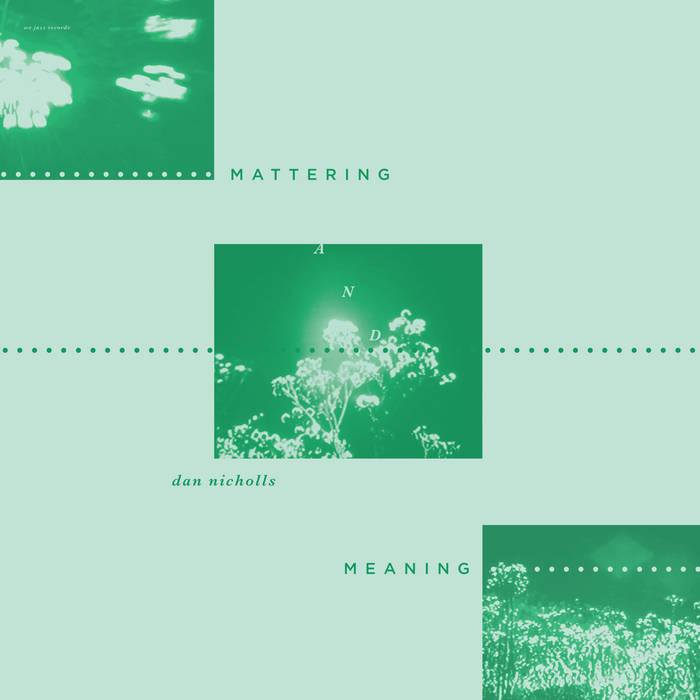 London-based keyboardist/producer Dan Nicholls (of Y-OTIS) introduces a new album project ‘Mattering And Meaning’ to be released by We Jazz Records on August 13th. Nicholls' music uses acoustic piano as its key element, transporting the instrument into new territories that sound remarkably natural and organic, whilst displaying a strong kinship with the world of abstract electronic music. The music utilises piano loops and field recordings as its key elements, forming what might be described on the surface as a fascinating ambient jazz record – but at the same time there's so much more at play here on deeper levels. Dan's music sounds at once otherworldly and immensely inviting.

After years of unlearning and unravelling the knots of a music college education – moving from a career in jazz, via electronic music, to a heartfelt embrace with rave culture and the feminist and queer theories which have so challenged perspectives across many disciplines on the objectified world and the values of capitalism – Dan Nicholls has spontaneously reimagined his relationship to the piano, that edifice of the decaying foundations of european classical music.

Here the emphasis shifts from the Work (as object) to the work (as activity). Recorded with only a mobile phone voice recorder, eschewing the gloss of high fidelity audio to embrace the problematic cyborg appendage of the i-Fone VI-$, these lucidly dreamed tracks, like notes in a journal, find their depth and form through quick experimentation and distillation – layering, stretching and collaging in ways that treat the piano as a textural element in the daily soundscape, spilling into, and going along with, regular activities with no ceremony or established system to the process.

For Dan, this is as much a documentation as a therapeutic process, casting aside the dogma and seriousness of much artistic practice whilst embracing joy and improvisation in order to search for deeper narratives. The speculative imaginings of three revolutionary thinkers, Donna Haraway, Ursula K. Le Guin and Karen Barad, have profoundly shaped the conception of this album, which also emerged from a deep interest in human relationships to ecstatic practices and communalities which have been so eroded by imperialist/patriarchal/capitalist forces. The title, "Mattering and Meaning", is a meditation on the crumbling habitual delineation and separation of both objects and definitions, including our (ironically) self-destructive human thinking patterns which position us as objective observers, above and over the world rather than inside it, apparently separate from nature and from each other.

Like the melodies and themes which permeate these nine sonic tales, inextricable but nevertheless present, our world and our species prove to be more enmeshed, interconnected and interdependent than the dominant rationalism would lead us to believe. This album is a humble gift to the listener, a proposition for inclusion in their own ongoing soundscape, the perpetual activity of listening and awareness.